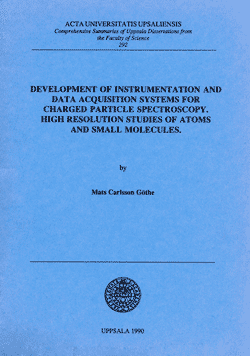 The redesign of a UV photoelectron spectrometer for gas phase photoelectron, Auger electron and ion fragment spectroscopy is described. Outer valence studies have been carried out for several small molecules. The specffometer has also been adapted and used for Doppler free coincidence studies on ion fragments of diatomic molecules.

Inner valence studies of atoms and molecules using HeII radiation have, up to now been limited by the intense HeI induced background. A new monochromator for HeII has been built which enables a large extension of the useful energy range in UV photoelectron spectroscopy. The focusing properties of the toroidal grating gives no reduction of the intensity of the HeII radiation after monochromatization. High resolution studies have revealed several new molecular states in N<sub>2</sub>, O<sub>2</sub> and CO. A high resolution photoelectron spectrum of Xe is presented which exhibits approximately 70 states previously not observed in photoelectron spectra. Valence studies of formaldehyde, acetylene and methane are also presented.

Two data acquisition systems have been developed. The usefulness of Ada in scientific applications and modern software engineering principles are discussed.

A portable distributed run time system for scientific real-time applications written in Ada, has been designed and implemented. The system allows an application to be pre- and/or post paftitioned and to run on a loosely coupled system. The program units that may be distributed are tasks, task objects, packages, procedures, functions and variables. Task objects may be dynamically distributed. The system has a high fault tolerance due to unit redistribution.

View the papers in my PhD Thesis

The NVV Auger Electron Spectrum of the HI Molecule

Vibrationally Resolved Study of the Fourth Photoelectron Band of Acetylene at 23.5 eV

Real Time Ada Compilers for the 68020